From DeepBlue to AlphaGo – The Virtual World made Real with AI

With Artificial Intelligence bringing about transitions in almost every domain, it should not be surprising to know that the gaming industry too has adopted AI for automating and improving our virtual world experience. From a rule-based AI that could play tic-tac-toe, to modern programs that can excel in complex games like Go, the gaming industry has come a long way working hand-in-hand with AI. With incredibly human-like characters to immersive graphical experiences, AI has revolutionized the gaming industry and helped it tackle the seemingly endless demands and expectations of its customers.

While the adoption of AI in domains like healthcare and manufacturing has occurred in recent times, AI is being implemented in the gaming industry for quite a long time. The techniques used to configure computer opponents in games of the 70’s may not have been truly AI, but we still refer to them as AI as they portrayed machines as ‘intelligent’. To be honest, a computer program that could beat a human player in a game of chess back then would have been a remarkable achievement. And in 1997, IBM’s DeepBlue did exactly that. It made history by beating then World Champion Garry Kasparov in a six-game match under standard rules. Fast forward to 2016, another milestone was reached when Google Deepmind’s AlphaGo beat the legendary Lee Sedol by 4 games to 1 in a 5-game match. 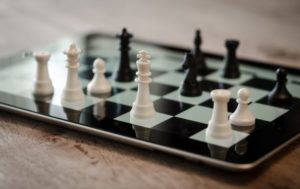 You must be wondering why that is something special. After all, Go is just another board game like chess. Yes, both are board games, but they are very different. Every possible chess move and the best move for each board arrangement can be stored into a single database. And that’s what DeepBlue did, scraped through a database of rules and used its phenomenal computational power to down Kasparov. But Go cannot be defined by a set of rules; there are near-infinite available pieces and just too many board positions for a task-specific program to deal with. Using reinforcement learning, AlphaGo learned to play the game from scratch; understanding its mistakes, learning from experience, adjusting and improving its strategies after every game, just like a human player would do.

While DeepBlue had game-specific heuristics, AlphaGo’s neural network powered program can be applied to different domains. Having made their mark in the area of games having perfect information, AI researchers shifted their focus to the games where some aspects were unknown to the players. These games offer scenarios that an AI would have to face in the real world, thus making them difficult to master. With the large sets of data available, the gaming AI can be more spontaneous and less predictable, thereby offering a better challenge and making the game interesting. An important role of AI in the gaming is to generate responsive, adaptive or intelligent behaviors primarily in non-player characters (NPCs) similar to human-like intelligence. The appearance of characters has been a lot more human-like (sometimes it may get hard to differentiate between a character in a game and a person on a video call). This makes interaction with characters a lot more natural. 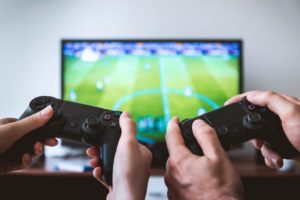 How AI is Revolutionizing the Gaming Industry

Another important thing to note is that with AI, the gaming experience is not only enhanced but also unique. The way an AI responds to your actions in a game may not be similar to the one for a friend of yours. This becomes more relevant for action, first person shooter or adventure games. When on a hunt in a game, you might choose path A and your friend might choose path B; with the help of AI, the computer program will respond to your actions according to your choices by tracking realistic markers like sounds made or footprints left behind. The ability of computer opponents to dodge, shield and shoot with accuracy in first person shooting games has improved by miles over the past half a decade. Moreover, different characters have different and evolving set of skills, which provides a much better and complex form of play as one has to consider whether to approach or avoid opponents. After all, where is the fun if you can shoot down the opponents with relative ease!

Another genre of games where AI has improved playing experience is sports. From the appearance of the players, to immersive graphics, all the way to the gameplay – AI has enhanced it all. Let us take football for example. Scoring a 25 yard screamer back in FIFA 09 wasn’t a tough task for a human player, but rolling forward to FIFA 19, you would have one in a hundred chance of doing the same. The reactions, game-reading, tactical adaptability of the AI has seen a significant improvement. And with each new game offering a new challenge, you could find yourself stuck in front of a console for longer than you thought. (I get lost for hours at a stretch!)

Games provide numerous fancy features at a go – visual art, sound design, graphic design, beautification, virtual cinematography, all in one single software. And so, they provide the perfect platform for AI researchers to test algorithms before being subjected to the real world. Whether it’s our way of interaction with a game, its content or their design, the advances in AI will continue to revolutionize the gaming industry. Just as professional chess was transformed by the introduction of chess-playing software, AI will help us discover strategies for various games. By beating humans and getting beaten by them, AI will not only challenge human creativity, but help enhance it. And you never know, this human-machine connectivity might result in finding clues to solving complex problems in unrelated areas like medical diagnosis, climate change mitigation, etc. The long-standing goal of general artificial intelligence may finally be achieved, sooner rather than later.